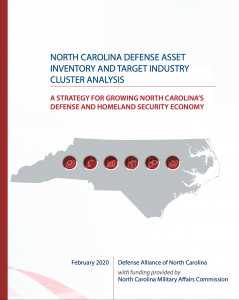 Click the image above to read the NC Defense Asset Inventory and Target Industry Analysis.

A study led by the Defense Alliance of North Carolina (DANC) and conducted by RTI International (RTI), a nonprofit research institute, and the North Carolina Department of Commerce has found that while North Carolina is a small market for defense contracts, it is among the fastest growing states in the nation for technology areas being targeted by the Department of Defense (DoD). Findings and accompanying recommendations were detailed in a report by DANC published in February 2020.

The study team based their research on the six technology areas the DoD is prioritizing for future contracts: advanced manufacturing, autonomous systems, data and knowledge management, human performance, materials and power. 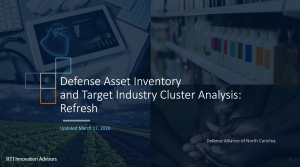 Click the image above to read findings of the presentation about the NC Defense Asset Inventory and Target Industry Cluster Analysis: Refresh – Background and Next Steps

The NCMAC commissioned a refresh of the NC Defense Asset Inventory and Target Industry Cluster Analysis that was developed by the NC Military Foundation in 2009.

The results of the study will support efforts to: