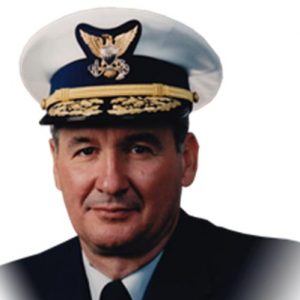 Real Admiral Busick retired from active military service during 1998 and currently serves as COO for Delta Private Jets. He also is a member of the board of directors for the Lenoir County Committee of 100, a member of the board of trustees for the Coast Guard Academy, chairman of the Lenoir County Chapter of the American Red Cross board of directors and a past chairman of the Coast Guard Academy Alumni Association Board of Directors.

Busick is an aviator who has commanded the Coast Guard Air Station in San Francisco, California, and the Aviation Training Center in Mobile, Alabama. He has served as deputy chief of the Office of Law Enforcement and Defense Operations at the U.S. Coast Guard Headquarters and as the U.S. Secretary of Transportation’s national security advisor – a position that gave him security policy responsibility for all modes of transportation in the country. During 1996, Busick joined the National Security Council as a special assistant to the President and Senior Director for Gulf War Illnesses.

Busick has worked as president and executive director of North Carolina’s Global TransPark Authority – an appointment made by then-Governor James B. Hunt, Jr. He also was appointed to a Presidential Oversight Board for certain Department of Defense investigations; and, following the terrorist attacks of September 11, 2001,  accepted a temporary appointment as the Federal Aviation Administration’s associate administrator for civil aviation security. In that position, the admiral oversaw the ongoing worldwide civil aviation security program for the United States.

Busick holds a master of science degree in Industrial Administration from Purdue University and is a graduate of the National War College in Washington, D.C.