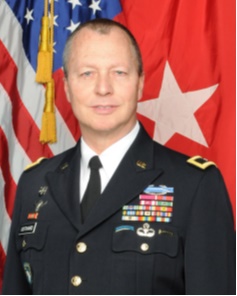 BG William J. Gothard was commissioned as a Second Lieutenant in the Infantry upon graduation from the University of Dayton with a Bachelor of Arts degree in 1978 and was assigned to the 82d Airborne Division as a Rifle Platoon Leader.

BG Gothard’s awards and decorations include the Army Distinguished Service Medal, the Legion of Merit, the Bronze Star Medal, Special Forces Tab, Ranger Tab, Combat and Expert Infantry Badges, Expert Parachutist and Military Freefall Badges. BG Gothard was honored by the award of the Order of the Long Leaf Pine by the Governor of the State of North Carolina in 2014.