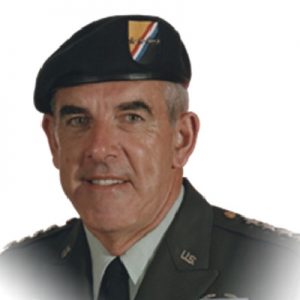 General Lindsay is president of the Airborne and Special Operations Museum Foundation, and a senior observer with the Army’s Battle Command Training Program. He served for 38 years in the military prior to his 1990 retirement.

Lindsay’s command assignments range from Platoon through MACOM in peacetime and war. His early assignments were with the 82nd Airborne Division and 77th Special Forces Group. He held eight different positions in the 82nd Airborne from platoon through division level. In Vietnam, he served with the Vietnamese Airborne Brigade, commanded the 2nd Battalion 60th Infantry, 9th Infantry Division, and was the G3, 9th Infantry Division.

He holds a bachelor’s degree from the University of Nebraska (Omaha) and a Master of Science degree in foreign affairs from George Washington University. Lindsay’s military education includes the Infantry Officer Advanced Course, the United States Marine Corps Command and Staff College, and the National War College.