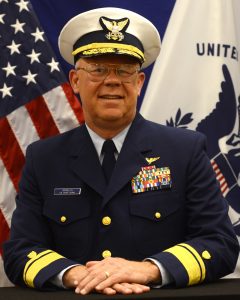 Rear Admiral Richard T. Gromlich retired from the Coast Guard on July 1, 2016 after 33 years of distinguished service.  In his final tour of duty, he served as Commander, Coast Guard 13th District in Seattle, WA where he was responsible for all Coast Guard operations throughout the Pacific Northwest.  In addition to maintaining operational control over all Coast Guard activities in the district, Rear Admiral Gromlich was responsible for cultivating efficient and effective relationships with numerous other federal, state, and local agencies, elected officials, the tribal nations located in the Pacific Northwest, and with the Coast Guard’s international counterparts.

A native of Milton, Pennsylvania, Rear Admiral Gromlich graduated from the U.S. Coast Guard Academy in 1983 with a Bachelor of Science in Civil Engineering.  He completed Naval Flight Training in Pensacola, Florida in 1986 and logged more than 3,600 flight hours attaining qualifications as an Aircraft Commander and Instructor Pilot in the HH-65A/B, and as an Aircraft Commander in the HH-60J.  In 1997, he earned a Master of Science in Industrial Administration from Purdue University’s Krannert School of Business.  His military decorations include the Coast Guard Superior Service Medal, Legion of Merit (four awards), Meritorious Service Medal (three awards), Coast Guard Commendation Medal, and Coast Guard Achievement Medal.

He is the president of Gromlich & Associates, LLC, a leadership and management consulting company.  He and his wife, Bonnie, have four children and reside in Denver, NC.